Jack Cookson is one of 2016’s nominees for the BBC Radio 2 Young Folk Award and will be appearing on the Wildlife Stage at 1:30pm, Saturday.

Jack is a multi-instrumentalist and an exciting, young and talented singer-songwriter; a standard set from him is rife with memorable vocal and harmonica melodies, accompanied by masterful, top class fingerstyle guitar arrangements. He combines elements of several genres – blues, folk and punk, paired with articulate lyrics of his roots, his life and of love.

In 2015, he released his self-produced and predominantly self-performed album entitled Revolt & Resolve, while performing over 100 gigs all round the Midlands and South West of the UK, both headline and support. Other past releases include his debut EP Five Times (2012), a split EP with Welsh singer-songwriter Ieuan Williams (2014), and a live EP recorded at Helios Studios, Bristol (2015). 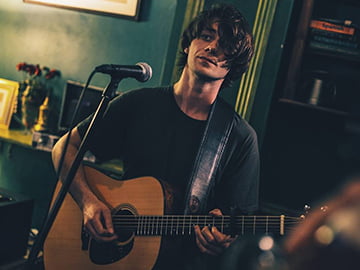