Hayseed Dixie is an American band which began in 2001 with the release of their first album, A Hillbilly Tribute to AC/DC. The band performs a mixture of cover versions of hard rock songs and original compositions.  Classic rock with a bluegrass twist, could anyone not like this version of  Bohemian Rhapsody (we’ll ask Roger on Saturday) …

Their style is a unique fusion of bluegrass and rock music and they are acknowledged as the creators of the musical genre “Rockgrass”. The band’s name is a linguistic play on the name of the band AC/DC.

Hayseed Dixie’s most recent album, “Hair Down To My Grass,” was released on January 12, 2015 worldwide and spent 3 weeks at the number 1 spot on the UK Country Chart. The band launched the new album in the UK with a performance of “Eye of the Tiger” on the Jools Holland Hootenanny New Year’s Eve BBC TV show. 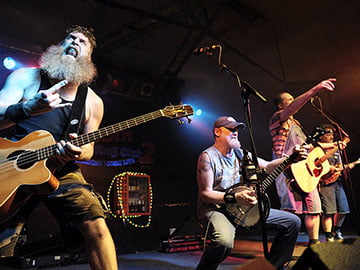