Gerry Colvin was born in Barrow-in-Furness.  In the 1970’s Gerry joined pop band ‘The Man Upstairs’. They released three singles and toured with The Smiths.  In the early 1980’s he co-founded and fronted the legendary John Peel favourite skiffle-cowpunk indie outfit ’Terry & Gerry’. This seminal band toured Europe and the USA and appeared on countless Radio and TV shows including “The Tube” and “The Old Grey Whistle Test”. Their five singles and album all reached No.1 in the indie charts. They wrote numerous theme tunes for Central TV and were the subject of a 30 minute documentary by the legendary film maker Norman Hull, which aired on British Television in July 1986. The quirky portrayal of their unique skiffle music and beloved Birmingham can be viewed below.

In 2010 Cherry Red released ‘Let’s Get the Hell Back to Lubbock’, the definitive ‘Terry and Gerry’ compilation

In the early 1990’s Gerry worked in Nashville as a professional songwriter and back in the UK collaborated with Alison Moyet, co-writing on an album project. He also penned numerous TV themes, three musicals, two film scores and wrote and presented for BBC Radio 2. His band ‘Gerry Colvin’s Inexperience’, a fusion of Soul, R and B and Folk-Country, became a firm favourite on the College circuit.

In 1993 Gerry formed the folk-pop band ‘The Atlantics’: they toured extensively including a slot at Glastonbury Festival where Gerry was compere, and appeared on BBC’s ‘Pebble Mill at One’. Colvin’s other major project at this time was film music as vocalist with ‘The National Screen Orchestra’; he also performed as a comedy double act with Hollywood superstar Mackenzie Crook.

In 1995 Gerry co-founded the five piece folk band Colvinquarmby. They released six critically acclaimed albums and were voted best band at the prestigious Fairport Convention Cropredy Festival in 2009. In 2010 they won the Hancock Award for ‘Best Live Folk Act’. In May 2013 Gerry was invited by New York producer and Robert Plant song collaborator Dave Barratt to record ‘Revolution’ for the ‘Beatles complete on ukulele’ album and website.

In 2014 Gerry released a self-penned solo album ‘Jazz Tales of Country Folk’ followed by ‘Six of One half a Dozen of the Other’ in 2016 which features ten brand new original songs.
.
In 2015 Gerry reformed ‘Terry and Gerry’ and was invited to support Status Quo on a nationwide tour. Terry and Gerry also appeared at Glastonbury that year following the release of their new EP ‘Dear John’.

As well as his new album Gerry’s book ‘The Rabbits of Zakynthos’ is due to be published later this year.

The Gerry Colvin band were delighted to be invited to appear at Cropredy Festival 2017 to celebrate 50 years of Fairport Convention!! They received a standing ovation!!

The new CD ‘Back and Forth’ was launched at Cropredy and is available from
www.gerrycolvin.com

Gerry is immensely proud to be Patron of Wellcombe Radio based in Stratford Upon Avon www.welcomberadio.co.uk/ and Banbury Folk Club, Oxon. www.banburyfolkclub.co.uk/

“Gerry Colvin is a writer of great substance who is able to give us something that has been largely missing in English Music for a long time. His subjects and characters are clearly defined and his songs create strong images and stories which can make us both laugh and cry in the same breath. This man is unique and unforgettable. The songs are brilliant. He should be a household name. Go see him.”
Phil Beer, Show of Hands 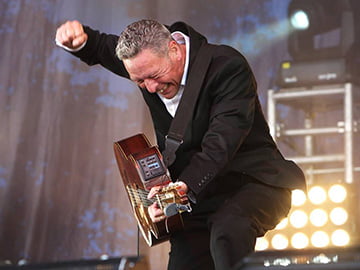