Fisherman’s Friends are a male singing group from Port Isaac, Cornwall, who sing sea shanties.[1] They have been performing locally since 1995, and signed a record deal with Universal Music in March 2010. Whilst essentially an a cappella group, their studio recordings now often include traditional simple instrumentation.

There’s no gang leader, no choir master and no holds barred in the singing of The Fisherman’s Friends. And fisherman’s friends they truly are – each and every member of this unique group are or have been fishermen, lifeboatmen and coastguards (as well as builders, artisans, hoteliers, and shop keepers) in Port Isaac. They’ve known each other since childhood and learnt their powerful brand of Cornish harmony singing at the local Methodist chapel – now the pottery of Fisherman’s Friend Billy Hawkwins (baritone), where the group get together with a crate of ale and a good deal of bonhomie to rehearse their repertoire and try out new songs.

English folk music has enjoyed a renaissance in the last decade, especially in the west country, with the likes of Seth Lakeman, Jackie Oates and Show of Hands achieving widespread acclaim. Now, with their new album of favourite Shanties due for release on April 26, The Fisherman’s Friends have landed themselves quite a catch. 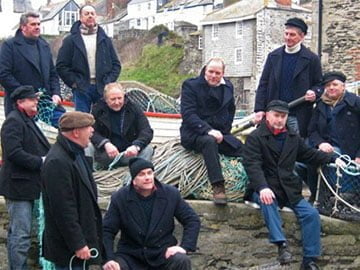