Fay Hield is a singer who seems to have been born knowing how to carry a tune but with the rarer gift of knowing how to go straight to the heart of a song.  Fay’s first two solo albums won many accolades as well as a nomination for the Horizon Award at the BBC Radio 2 Folk Awards.  Fay’s choice of material and the delivery of it, reflect a rare sensitivity and appreciation of the tradition whilst remaining naturalistic and highly distinctive.

Her longstanding band, The Hurricane Party, expands to include members of The Full English, including fiddle, concertina, banjo, guitar, percussion and bass. At times sparse and contemplative, at times with a festival stomp, the music is captivating and engaging with plenty of choruses and vibrant interaction with the audience.

Bringing new arrangements to old songs, Fay continues in her exploration of the incredible repertoire that is the English tradition pushing at the boundaries of our engagement with music.

Fay has played with Sam Sweeney and Rob Harbron since touring her first solo album to form The Hurricane Party.  The trio line up expanded for Orfeo in 2012 to include Andy Cutting and Roger Wilson and, for Old Adam in 2016, Ben Nicholls and Toby Kearney have been added to the mix. All the musicians sing and play a variety of instruments and they’re involved for their approach to music-making and flare for bouncing off each other as much as for what they play. Fay’s partner Jon Boden also features on the albums, and there are guest appearances from Martin Simpson.  The Hurricane Party is a movable feast, seeking to reinvigorate old songs and then take them out to reach new ears. 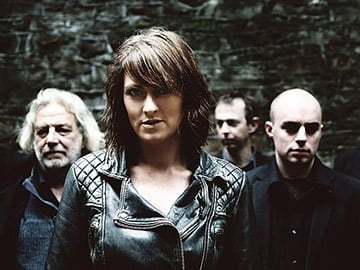