John Watterson (A.K.A Fake Thackray), an adopted Yorkshireman, was born and grew up on the Isle of Man, which is where he first saw and met Jake Thackray in 1975. He recalls a performance at the local folk club, which had the audience in stitches and also a chat with a very modest and self-deprecating Jake at the interval – ‘a big man and a huge talent, clearly embarrassed by the standing ovation, Jake preferred to have a pint at the bar with the punters and didn’t really see what the fuss was about’.

John took a business degree at Loughborough (‘my mum was stationed at Bletchley Park in WW2 and said Loughborough was quite nice’) and this was followed by a 30 year ‘accidental’ career in the laundry industry (‘I went to an interview in 1979 just for the travel expenses, and the buggers gave me a job!’).

On learning of Jake’s passing in 2002, John decided that the songs were too good not to be kept alive, so he set about learning more of them. ‘Before I had decided what to do when I grew up, it was time for my mid-life crisis. I told my wife, Carol that I wanted to give up the day job and sing Jake’s songs and she said – OK then – so I did!’ 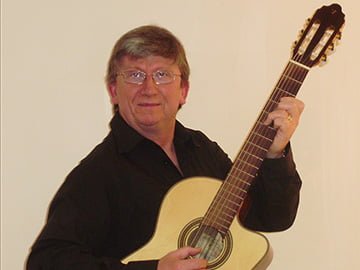