Self-taught on guitar and violin, he is a lifelong autodidact — and his independent streak shines through in his composition and studio work. Always direct and unafraid to speak his mind, his song writing has been praised for its surgical clarity. His work is typified by his trust in the space music can create and a gift for lyrical understatement. He cites his major influence as “Anon”.

Throughout his career independence has been balanced by collaboration. The artists he has worked with include Billy Bragg, Andy Gangadeen, Andy Cutting, Jean François Vrod and Hugh Lupton (Wood and Lupton’s “One in a Million” won Best Original Song at the BBC 2 Folk Awards in 2006). Recently he has worked alongside Martin and Eliza Carthy and others in The Imagined Village: “Cold Haily Rainy Night”, performed by Wood and Eliza Carthy, took the award for Best Traditional Song at the Folk Awards in 2008.

He set up R.U.F Records in 1992 and this label continues to carry his catalogue. He also founded The English Acoustic Collective, a movable feast of musicians, writers, photographers and choreographers who look to England’s indigenous arts as their inspiration. 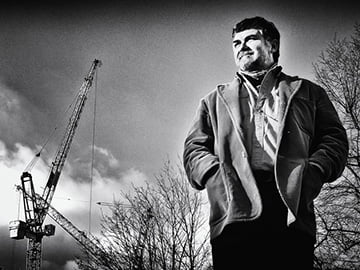