Chris Sherburn and Denny Bartley have been bringing their unique sound to audiences across Europe and America since the early 1990s, when a chance meeting at a music session created one of folk music’s most enduring partnerships. Known for their soul stirring songs, exhilarating tunes and a love of the craic, Chris (concertina) and Denny (guitar and vocals) ensure that no two concerts are ever the same.

Chris grew up surrounded by folk music of all kinds – his home was a regular haunt for passing folk singers and musicians. Denny, born in Co. Limerick, is drawn to the inheritance of age-old slides, slow airs, slip jigs and wild reels.

Founder members of the band Last Night’s Fun which received international acclaim and a loyal fan base over 11 years together, they have now returned to their roots as a duo. 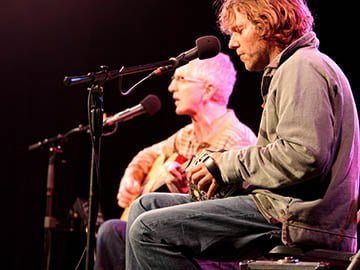