Chas & Dave (often billed as Chas ‘n’ Dave) are an English pop rock duo, most notable as creators and performers of a musical style labelled “rockney” (a portmanteau of “rock” and “cockney”), which mixes “pub singalong, music-hall humour, boogie-woogie piano and pre-Beatles rock ‘n’ roll”. For a time, “Rockney” was also the name of their record label, and they achieved several British chart hits, their major breakthrough being “Gertcha” in 1979, which peaked at No. 20 in the UK Singles Chart, and was the first of eight Top 40 hit singles the duo played on. They also had nine best-selling albums. In October 2013 they released That’s What Happens, their first studio album in 18 years. 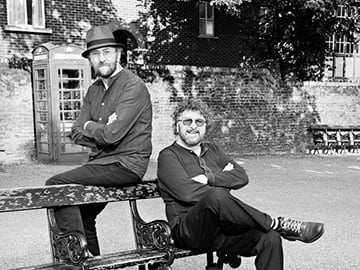