Throughout their career Capercaillie have drawn on two great strengths to inspire them. The first of these is the astonishing musical dexterity of the various fiddle, whistle, flute and pipe who have performed with them over the years, lead by the accordion and keyboards of band founder Donald Shaw. The other foundation of the band has been the peerless voice of co-founder Karen Matheson, described by Sean Connery as having “a throat that is surely touched by God”. Universally recognised as one of the finest Gaelic singers alive today, Karen’s exquisite voice has been at the centre of the band’s music, whether breathing new life into 400 year old Gaelic songs or bringing her luscious vocals to the band’s contemporary compositions…

There have been many milestones for a band who have sold over a million albums world wide. These include three silver and one gold album in the UK, the first Gaelic Top 40 single, writing the music for, and appearing in the Hollywood movie “Rob Roy”, and performing in over thirty countries including Iraq, Macedonia and the Sudan.

Capercaillie have been credited with being the major force in bringing Celtic music to the world stage, and their unique fusion of Gaelic culture and contemporary sound has always stretched boundaries in their quest to keep the music evolving.

It is a mighty long way from Oban High School to the Hanging Gardens of Babylon in Baghdad, but Capercaillie have made this journey and stopped off at many other exotic locations along the way . However, their greatest achievement has been to mould a central strand of their Gaelic heritage into a fresh, new sound, capable of reaching out to the ears and hearts of people all over the world. 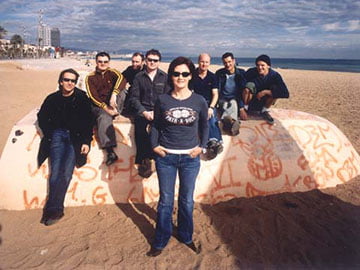 This content isn't available at the moment ... See MoreSee Less

When this happens, it's usually because the owner only shared it with a small group of people or changed who can see it, or it's been deleted.
View on Facebook
·Share

Like all artists due to perform over the next few months we are hugely disappointed to be unable to play in France due to the International situation with the COVID 19 Virus. We send our heartfelt warm wishes and Scottish hugs to the team, to the venues, and of course to audiences across France.
Please stay safe and well – Moran gaol – Capercaillie. ... See MoreSee Less

Like all artists due to perform over the next few months we are hugely disappointed to be unable to tour Australia due to the International situation with the COVID 19 Virus. We send our heartfelt warm wishes and Scottish hugs to the team at Woodfordia, to the venues, and of course to audiences across Australia.
Please stay safe and well – we hope very much to reschedule when the time is right for everyone! Moran gaol – Capercaillie. ... See MoreSee Less

Sorry the concerts won't be going on. Was looking forward to seeing Capercaillie live. Stay safe and well. Will see you sometime soon

Hopefully the tour will go ahead later on. Camperdown will put on our Western District hospitality.

My Mum and I were very much looking forward to seeing you again at Barwon Grange (and me also at Portarlington and Bundanoon). Hope you can make it here soon. ❤️

What about Capercaillie's show on 18 April at Pan Piper (2-4 Impasse Lamier), Paris, France? Is it cancelled yet? Postponed yet? If so, will it be rescheduled?

Don’t forget the US.....Look up Red Rocks amphitheater in Denver. A must venue

Kirsty Campbell gutted :(( fingers crossed for a reschedule cause we are going 🥰