Calvin Thomas is a Singer/Songwriter from the seaside city of Plymouth. His songwriting has been described as honest and poetic, with a voice that has been noted as one that transcends generations.  He will be appearing in The Quay West Cave on Sunday at 16.30.

Calvin’s influences range throughout many genres including Folk, Blues and Punk but maintains a universal audience from all backgrounds.
Having shared the stage with the likes of Cory Branan, Tim Barry, Franz Nicolay, Austin Lucas, Listener and many more, Calvin is looking forward to what the future brings.

With his first E.P ‘Translucent hills’ released March 2016 we still have plenty more to hear from Calvin Thomas. 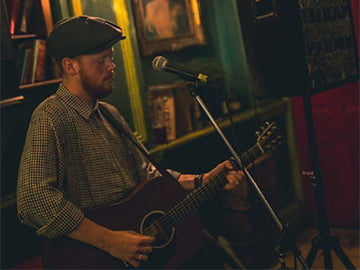