Portsmouth’s longest running blues band Burnt Ice have been around since 1987! That’s a scary thought, but in that time they have developed one of the most powerful sounds around. The blues of Burnt Ice blend raw funky grooves with jazzy riffs to create a vibrant danceable sound. Music to listen to but best listened to on your feet!

Burnt Ice formed in 1987 and have evolved through various lineups always featuring the hardcore of Andy Broad on guitar and vocals; Simon Tufnail on bass and Alan “Blackie” Blackmore on Drums. In 2009 they were joined by Martin Bird on guitar after his return from Sweden, as Martin had previous worked with Simon and Blackie for many years in other projects this new addition added extra energy to an already powerful and funky combination. A new EP was recorded in June 2010 to reflect this new sound and featured both new original material and a few old favourites.

The EP was particularly well recieved when Burnt Ice played at the Festival Elouges en Blues in September 2010.

At the start of 2012 Burnt Ice were rejoined by virtuoso harmonica player Matt Beckwith, Matt has had several stints in the band over the years, first joining a very early lineup, leaving to tour the world for a couple of years, then joining again for a longer stint, before taking a break in 2009 to work with some other projects, most notably the White Knuckle Blues Band, he rejoined us just as saxophonist Chris Shaw departs to take up along contract in Guernsey, perfect timing! 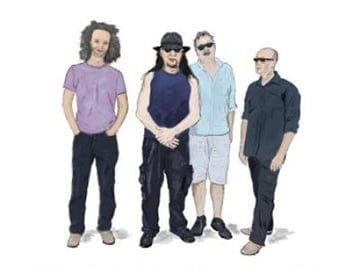