Brighde Chaimbeul (Radio 2 Young Folk Award Winner 2016) is a piper from the Isle of Skye, Scotland.  She has been described by Tim Chipping, fRoots Magazine, as an “exceptional musician” and by Mark Radcliffe, Radio 2’s Folk Show,  as a “mesmerising piper”. Her trio, comprised of Innes White (guitar) and Mairi Chaimbeul (harp) has performed as part of many festivals including Cambridge Folk Festival, Fairport’s Cropredy Convention, Towersey Festival and Skye Festival. As an award-winning soloist on both smallpipes and Highland pipes,  Brighde has performed across the country at events such as Piping Live and Celtic Connections.

A native Gaelic speaker, her style is rooted in her indigenous language and culture, but draws inspiration from Scandinavian music and the driving tradition of Cape Breton tunes. She has received tuition over the years from acclaimed pipers Niall Stewart, Iain Speirs, Fin Moore and Dr Angus MacDonald.

Brighde plays Scottish smallpipes in the key of C and D made by Fin Moore and Hamish Moore. 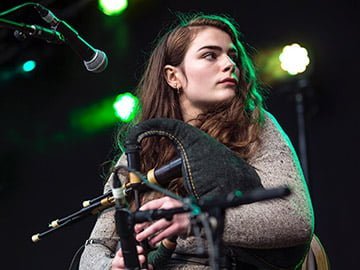