Andreas Tophøj and Rune Barslund are among the leading Danish traditional musicians of their generation.

Specializing in fiddle and accordion but also encompassing viola, whistle and vocals, they have married their roots in the Jutland peninsula with playing experiences from residing in Ireland, Finland and North America and encounters with musicians from other cultures to create original compositions that carry on the Danish tradition while looking out across the world.

Tours in Germany, England, Wales, Scotland, Ireland and Finland have honed their communication skills as an entertaining and accomplished duo. An award for Track of the Year – for their The Danish Immigrant EP – and an Artist of the Year nomination at the Danish Folk Music Awards have acknowledged their musical ability and composing talents.

It is in live performances especially that these musicians shine, sharing music and stories that stay in audiences’ memories long after the last note has sounded. 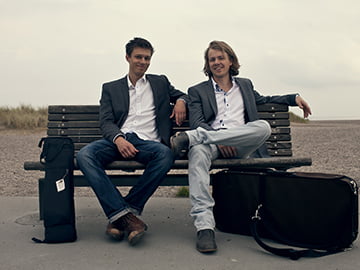