Alan Burke is widely regarded as one of the finest ballad singers of his generation. Well-known as a member of Rambling Boys of Pleasure, Alan possesses an almost inexhaustible repertoire of traditional, contemporary and self-penned songs in both the English and Irish languages. Accompanied by his unique driving guitar style, Alan’s powerful presence and technique have featured on two highly acclaimed solo albums, On The Other Hand (1998) and Tip Of The Tongue (2000) alongside numerous recordings and collaborations with the bands and projects that have formed the core of a great life in music. A commanding stage presence, with a voice that is powerful, sensitive and crystal clear, Alan’s gigs are always truly memorable.

He began his musical career as a drummer, before making his name in traditional music circles in the 1980’s and 90’s as the lead singer, guitarist, and bodhrán player with the tremendous band Afterhours, with whom he made three albums – Afterhours in 1988, Hung Up And Dry in 1990 and Up To Here in 1992 – and toured extensively worldwide. Since then Alan has appeared as a member of bands including At First Light, Airla and Tulsk.

More recently Alan has been heavily involved in collaborative projects, including the Afterhours Bothy Band Tribute, and he was the cornerstone of the four acclaimed annual Irish Sea Sessions concerts and albums produced in Liverpool, Ireland and London that saw him combine with Declan O’Rourke, Damien Dempsey, Pauline Scanlon, Emily Portman and many more, and from which Rambling Boys of Pleasure evolved. Alan has worked extensively both as a record producer and as an actor, including the play This Is What We Sang that won Production of the Year at the First Irish Theatre Festival in New York 2010. He has also presented TV programmes in the Irish language for the BBC and TG4. 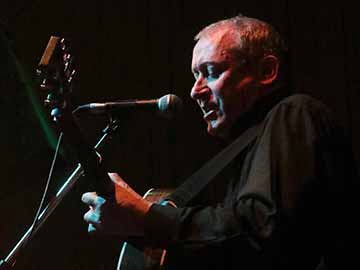