10cc first appeared at Wickham back in 2013 as a support slot which proved one of the big hits of the 2013 Wickham Festival.  They then played in 2015 as headliners by popular demand.  Well … drum roll … they’re back at Wickham Festival 2017!!!  With a string of top 10 hits including Donna, Dreadlock Holiday, Rubber Bullets and I’m Not in Love, this evergreen act will bring our opening night to a fantastic finale.

Among the most inventive and influential bands in the history of popular music, 10cc are one of the very few acts to have achieved commercial, critical and creative success in equal measure. Fronted by original band member Graham Gouldman they are still going strong 40 years on.

Graham Gouldman
That loyal little song-bug has stood him in good stead through decades of distinction as one of the UK’s most productive and imaginative hitmakers. We’re talking very much in the present and future tenses, too, since he continues to write with contemporary hitmakers and see his classics renewing themselves constantly, as with the news that ‘For Your Love’ and ‘Heart Full Of Soul’, two of the timeless hits he wrote for the Yardbirds, have lately been part of live sets by the White Stripes. The headlines of Graham’s career may always be his early compositions for the scenesters of the ’60s, his crucial role in the super-intelligent ’70s pop of 10cc, and his livewire combination with Andrew Gold in Wax during the ’80s.

Rick Fenn
Born in Oxford, Rick was plucked for a band called Gentlemen to join 10cc towards the end of 1976, at the launch of the Deceptive Bends album and has been part of the team ever since. From 1979, he also toured and recorded with Mike Oldfield and with him co-wrote the song Family Man, which become a worldwide hit for Hall & Oates, and won him an ASCAP award for best song in 1984. In 1985, Rick wrote and recorded his own album Profiles, with Pink Floyd’s drummer Nick Mason. The single from the album, Lie for a Lie – sung by Dave Gilmour and featuring Maggie Reilly – was a hit in the USA.

Mick Wilson
Mick has performed and recorded with artistes such as Lionel Ritchie, Kylie Minogue, Westlife, Cher, Alice Cooper, Alison Moyet, Chris Rea, Donny Osmond, Robin Gibb, Cliff Richard, Lulu and the K.L.F.  He is also a regular member of The SAS Band which play all over the world, with guest performers such as Brian May, Roger Daltrey, Roger Taylor, Kiki Dee and Tony Hadley.  For over 20 years, Mick has had his own recording and production facility, which has been the base for a varied career as a producer and songwriter, as well as composing music for TV and live events, for companies such as Sky, BBC, ITV, Marks & Spencer, McDonalds, BT, Levi’s, Toyota, Mercedes, Ford and Mitsubishi.

Paul Burgess
Paul met Graham Gouldman in the early days of 10cc when recording at Strawberry Studios and when they planned to start touring asked him to join as an auxillary member, playing drums, percussion and keyboards for what was to become a ten year period. He started recording with them in 1976. In 1982, he toured throughout America and Canada with Jethro Tull and in 1983 played his final tour with 10cc around the U.K. The ’80s became a tour fest with Camel in (’83/’84), Elkie Brooks (’85), Joan Armatrading (’86), Alvin Stardust (’87), Gloria Gaynor (’88) and Icicle Works (’89).

Mike Stevens
Born in Wisbech, Cambridgeshire, Mike is a musician, producer and writer graduate from Birmingham School of Music, where he studied clarinet, euphonium and piano. He is widely known as the Musical Director for Take That, having performed with them on every tour since 1993, including the Progress stadium tour last summer. 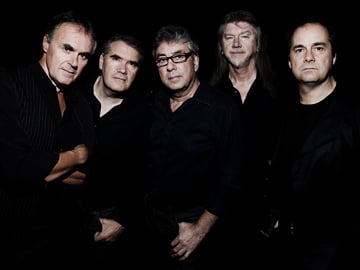