The Local Honeys are comprised of Linda Jean Stokley and Montana Hobbs. Stokley from the rolling hills of the Bluegrass, and Hobbs from the foothills of the Appalachian region have developed a sweet sound of the bluegrass kissing the mountains.

They have dedicated themselves to the preservation of old music and the creation of new music. Their songwriting often reflects subject matter that little girls ought not talk about. This element played a strong impact in the production and creation of their debut album, “Little Girls Actin’ Like Men.”

Including both traditional and original songs, “Little Girls” showcases the Honey’s ability to tear into hard driving fiddle tunes, sing the high lonesome sound, and tell a damn good story.  The Local Honeys have toured heavily across the U.S. as well as internationally as ambassadors of Appalachian music.  They were winners of the 2017 Chris Austin Memorial Songwriting Contest at Merlefest in Wilkesboro, North Carolina for their anti-strip mining song, “Cigarette Trees”. 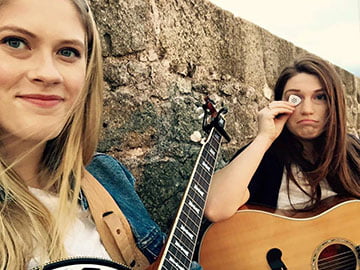 This Thursday we're teaming up with the best of the best. LIVE from the Kennedy Center via the Shine House at 4pm EST with Chattanooga's finest, Amythyst Kiah. 📺📽️
@kennedycenter
@southartsorg
@amythystkiah
@somersessions
@theshinehousesomerset
... See MoreSee Less

Hey hey!
Here’s a little something we did tonight for an organization near and dear to our hearts!
The FFA promotes rural living and leadership and we are honored to be apart of it!

Or visit our website and pick ya up some swag! We still got hats and vinyls!
www.thelocalhoneys.com

Great stuff! Where did you get your version of Sally My Dear? Not as hokey as Pete Seeger version. Pretty song and yall sing great. Thanks.

First woman in FFA and it shows. That pasture is looking real good in July!

Can u post the name of the artist who makes the little wooden man, again. They r so cute!!’n

Got watch this as the sun came up. Happy to see & hear you two -thanks My dog Bo is the king of finding something to roll in I think I’m immune to the smell now

Jeff Warner has a dancing doll. Do you know Jeff?

Hey Honeys! A question born out of pure British ignorance - what is FFA? Tell us more. Thanks. Pete

TONIGHT were gonna be singing some songs via the KY FFA Leadership Training Center FB page. Tune in at 8pm EST.Don't forget to check out our final Campfire Session tonight at 7 CDT with Kentucky's own The Local Honeys! ... See MoreSee Less