FOS Brothers will make their Wickham debut on Saturday 6th August 2022.  The force behind the FOS Brothers has always been Dave and Sam McCrory. Born in Belfast during the height of the troubles their influences derive from hard schooling on the streets and strict Northern Irish evangelical church attendance, sometimes 6 days a week.

Dave left Ireland at the age of 19 to study at Oxford Polytechnic and Sam came over 4 years later to form the band. They met Rom Dobbs and have collaborated with him for 25 +  years. Rom started out in punk bands and developed an fascination with world music when living in Devon near Dartington College where his dad was head of music department. Pete Bingham is best known for his band Waulk Elektrik who became very popular on the Roots music circuit in the 90’s.

They are a right bunch of characters all weird in their own way but managing to merge into a wall of sound when let loose on stage.

Hard to button hole their appeal sometimes as they move seamlessly from tear jerking Irish ballads to full on rocked out floydian space rock – they are equally happy with a pin drop silence Arts Centre or a bouncing Festival Marquee. They adapt their set to suit the audience always aiming to have a shared experience and an uplifting evening. 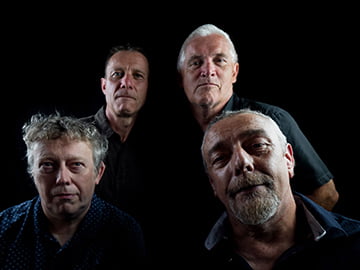