Three-time Grammy Award winner, Lucinda Williams has been carving her own path for more than three decades now. Born in Lake Charles, Louisiana, Williams had been imbued with a “culturally rich, economically poor” worldview. Several years of playing the hardscrabble clubs gave her a solid enough footing to record a self-titled album that would become a touchstone for the embryonic Americana movement – helping launch a thousand musical ships along the way.

While not a huge commercial success at the time Lucinda Williams (aka, the Rough Trade album) retained a cult reputation, and finally got the reception it deserved upon its reissue in 2014. Jim Farber of New York’s Daily News hailed the reissue by saying “Listening again proves it to be that rarest of beasts: a perfect work. There’s not a chord, lyric, beat or inflection that doesn’t pull at the heart or make it soar.”

For much of the next decade, Williams moved around the country, stopping in Austin, Los Angeles, Nashville, and turning out work that won immense respect within the industry (winning a Grammy for Mary Chapin Carpenter’s version of “Passionate Kisses”) and a gradually growing cult audience. While her recorded output was sparse for a time, the work that emerged was invariably hailed for its indelible impressionism — like 1998’s Car Wheels on a Gravel Road, which notched her first Grammy as a performer.

The past decade brought further development, both musically and personally, evidenced on albums like West (2007), which All Music Guidecalled “flawless…destined to become a classic” and Blessed (2011), which the Los Angeles Times dubbed “a dynamic, human, album, one that’s easy to fall in love with.” Those albums retained much of Williams’ trademark melancholy and southern Gothic starkness, but also exuded more rays of light and hope. This all lead to the 2014 release of Williams’ first double studio album Down Where The Spirit Meets The Bone. The album received overwhelming praise from the media and fans, thus proving that Williams’ songwriting is as strong and important as it has ever been. 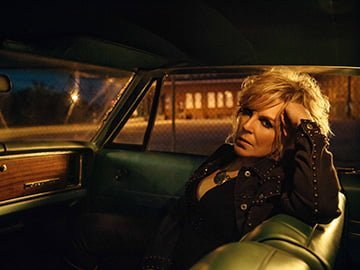 Sitting in with this little songbird for a song or two soon. Tune into @missmargoprice’s livestream from @bbowlnashville on Sept 9 & 10! We’re gonna have some fun.🤘🏼 ... See MoreSee Less

Will do; what a lovely lady; looking forward to hear her sing tomorrow!!Thanks Lu for letting us know about her! Sending you love & looking forward when you can have live concerts again!!

I'm really sad to have not seen you in July when you were scheduled to appear at the Vancouver Island MusicFest. I hope it can be rescheduled. Cheers.

Happy Labor Day - Here’s a version of Bruce Springsteen's song "Factory". It's dedicated to all the workers who have built this country. We’ll stand together and keep on working, as we know better days are coming. ... See MoreSee Less

Thank you for this Lucinda; one of my favs from The Boss also; you do him proud. And I was at that Fillmore concert you reference; you were Fabulous as you always are! Your Fillmore shows have a special place in my heart🎼😘✌🏻

So glad you’re still working! Hope you will be able to tour New England once this miserable pandemic is over.

This Springsteen song..Factory...covered by my favorite Female Singer/Songwriter Lucinda Williams (great version)..reminds me of watching My Dad walk thru the gates at Quincy Shipyard (Bethlehem Steel and General Dynamics)..with his Hard Hat and Lunch box..fantastic Labor Day Tribute

I remember when you played this live in DC and I immediately went home and found Bruce’s version. Both brilliant!

Great song from a great album. One of the most authentic blue-collar songs ever. Very cool cover of it, Lu.

I really enjoyed this. Don’t think I’ve ever heard it live. Happy Labor Day everyone. 🌻

Love you version Lucinda. Usually not a fan of people covering Bruce’s songs but this is the exception ❤️

Thanks for this! From Milwaukee, where we used to build things....

Gawd bless the working man. The backbone of this country❤

Thanks for the tip on "Thievery Corporation"

What a great cover song to pick Lucinda! The Boss must really love you doing that! I know I do!!🎶⭐️☮️💖

I was at that show

Jobs coming back to America is a very good thing.

Buddy Miller, David Sutton, Lu and Jim Lauderdale off on stage left at The Ryman last year. What a night that was! ... See MoreSee Less

I was thrilled to be there. It was an amazing show!

What a great show that must has been; Still amazing photo!! I can hear you singin' in my nid Lu!!; won't be missing the next show wherever after covid!!⭐️🎸🎤☮️💖

It was excellent! Great night. I was like 5th row just off center to the left. ❤️🎼💯

Seems like the only one missing would have been Shawn Colvin. Lucinda's shows are always good !

And Emmylou on her birthday!

Saw Buddy twice with Julie at the Newport Southgate House - what an awesome couple!

Drove down from Canada (pre-covid) to see the show!

Flew in from San Diego to catch the show with my friend Jennifer Weintraub Iverson. What a magical night!!!!

Wow, what a line-up Lucinda 🎼

Lenore Rittenhouse your man was there!