This 10-piece band effectively hold their own folk festival on stage. Although fronted by Edinburgh fiddle player Gavin Marwick, each of the performers take turns playing their own mini-sets as duos or trios as well as combining as an enthusiastic ensemble for a spectacular show. 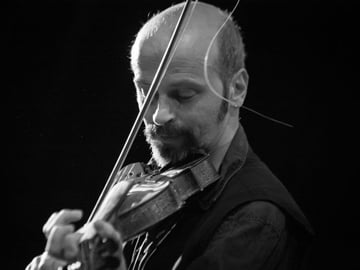 There's not many outings for Journeyman this season but here's one at LOCHARTHUR on the 30th of June! Featuring some special guests and some familiar faces, details on the poster attached: ... See MoreSee Less

Thank you Gavin, Ruth & your fellowship of terrifically talented musicians. Absolutely loved your marquee music at loch Arthur. Only regret was not letting myself get up and dance as inspired to, admired the smiling suited dancer who was brave enough to at the front to finish. Wonderful to watch! Looking forward to contributing to crowd funding for recording your gorgeous Galloway impressions with Scottish ensemble, maybe you’d be able to make that live? Big thanks 😊

Looking forward to it!

If you're not already, then please come to Gav's 'Impressions of Galloway' concert at Dumfries and Galloway Arts Festival. It's going to be a very special, unusual concert, and both the Arts Festival and Gavin himself have really pushed the boat out to make it happen, so it would be great to see as many of you as possible. Shows like this are so expensive to put on that it's not possible to do them except as very rare one-offs. We're making a film of it as well! It's on Sunday 27th May at the Easterbrook Hall in Dumfries, ticket link below.

Gav has spent months writing this music (and several years mulling over the concept, and writing tunes with something like this in mind), and has been shut away in his studio, barely coming up for air! It's written as a collaboration between his Journeyman big band, which on this occasion will be Gavin on fiddle, myself on nyckelharpa (including my new tenor nyckelharpa getting it's first outing!), Fraser Fifield on pipes, saxophones and whistles, Jenn Butterworth on guitar, Angus Lyon on piano and Davy Cattanach on percussion, and the wonderful Scottish Ensemble, which for this concert will consist of double bass, cello, viola and five violins.

The music references people, places, connections, culture and the landscape in Dumfries and Galloway, and is very cinematic and astonishingly beautiful. The combination of musicians is a rare treat, with the lush strings of the Scottish Ensemble giving everything much greater depth. We can't wait to show it to you all! Don't miss it, it's very unlikely to ever happen again!

There will be short sets from the Scottish Ensemble, from Journeyman, and then the two groups together presenting 'Impressions of Galloway'.

Here's the link for tickets:

Here's Journeyman doing it's thing at the Queen's Hall in Edinburgh: www.youtube.com/watch?v=DGyeeofZ1lg

And general information about the Scottish Ensemble: scottishensemble.co.uk/

Hope to see lots of people at the concert, and thanks to everyone who has supported our endeavours thus far, it wouldn't be possible without you...

Oh, the album is already out? Where can I order it? :D