Formed to fuse Emily’s passions for Medieval and Renaissance melodies/songs and modern folk styles. Emily has had a successful career in both Folk (Askew Sisters, Alma, Ceilidh Factor and the Elizabethan Session) and Early Music (The Artisans, Shakespeare’s Globe, Glyndebourne, The Dufay Collective, Joglaresa, Mediva and the Medieval Babes). Being an multi-instrumentalist playing vielle, shawm, bagpipes, recorders and medieval harp, Emily wanted to explore the possibilities of mixing these unusual sounds with modern instruments.

The Askew Sisters together rework and reinterpret songs and balladry, creating breath-taking arrangements, which resonate profoundly with contemporary audiences.

We had a lovely gig at Worcester Early Music Festival. Thanks to everyone who came along and to everyone involved in organising it ... See MoreSee Less

Wishing you a great time!!

I think the smiles give it away. 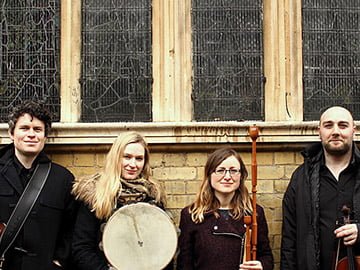 The Emily Askew Band appeared in 2018